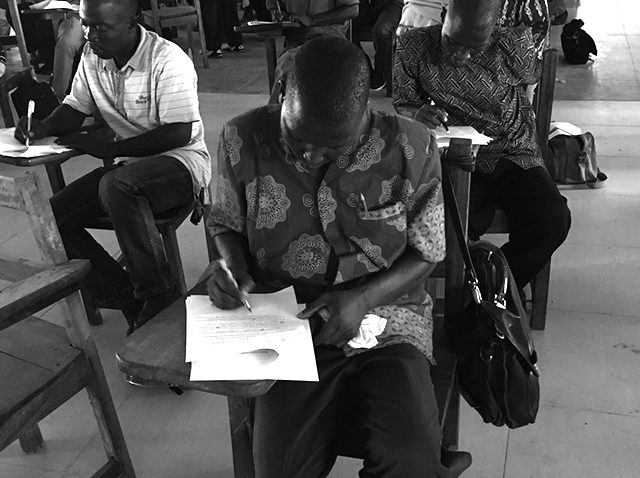 Teachers being tested to validate their abilities and so confirm their places on the national payroll, during a pilot project in Nimba, Liberia in April 2016.

Years of sustained conflict has left Liberia’s public education system severely challenged in capacity and resources. At the outset of his term in 2015, George Werner, Liberia’s then-education minister, estimated that potentially 10 percent of the national $40 million education budget could be productively redeployed to hire additional teachers and retrain teachers needing support, if “ghost workers” and severely underqualified teachers were removed from the payroll.

While the final districts are still being reviewed under the current administration, as of the most recent independent audit, 18,000 teachers have been vetted, over 2,000 individuals have been removed from the payroll, representing more than $3 million in savings, from which 1,800 new teachers have been hired and deployed to some of Liberia’s most disadvantaged schools.

In President Ellen Johnson Sirleaf’s second term, the Government of Liberia embarked on an ambitious education transformation program – seeking to rapidly improve the quality of education available to students, in a context of severely constrained resources and competing priorities. Liberia is the sixth poorest country in the world, with nearly half its population illiterate, following a decade of civil war and the outbreak of Ebola. Better education is essential for breaking the cycle of poverty, giving young people the skills they need to lead productive lives and contribute to the country’s development.

Big Win Philanthropy began its Liberian collaboration in 2016, inspired by the drive and ambition of then-Education Minister George Werner and President Ellen Johnson Sirleaf to upgrade their education system with bold interventions. While the initial partnership centered around an effort to vet the teaching workforce and remove “ghost workers”, Big Win extended its support to the determined Minister and President in their collective effort to maximize the progress they could make toward realizing the Education Ministry’s Getting to Best sector plan. A crucial part of this effort involved supporting them to navigate and align the many country partners toward one unifying agenda and one set of priorities.

In 2018, Big Win extended its support to help facilitate a good transition for the incoming minister and team to ensure progress could continue seamlessly and that the new administration had sufficient support as it took up the reins. The current education reform effort being led by Minister of Education Ansu D. Sonii, has placed improving the quality of education to children as the top priority, primarily by driving student performance through improving school management and supporting teacher development. Big Win has committed to supporting the Ministry to hone its plan through the end of 2019.

Big Win has provided support to the Ministry of Education across a range of areas including those outlined below:

Teacher Vetting Reform: With Big Win’s assistance, the Ministry of Education went from county to county, vetting and testing the entire 18,000-strong teacher workforce. The exercise enabled the government to remove 2,000 “ghosts” from its payroll, freeing up more than $3 million in annual savings, which is being reinvested in the education system. With this money, the Ministry has employed about 1,800 new teachers, and training for existing, under-performing teachers is now under way. In addition to the technical support provided through this process, Big Win retained an independent auditor to validate the removal of teachers and the redeployment of these funds toward hiring new teachers and teacher training.

The Education Delivery Unit: As Liberia moved towards a transition in government at the beginning of 2018, Big Win supported the outgoing government to establish a new independently-selected Education Delivery Unit (EDU), located in the Ministry of Education. The EDU’s first task was to ensure the seamless delivery of priority reforms throughout the change in government and to support the incoming ministerial team as needed. Given that the ministry does not have a permanent secretary, the EDU played a crucial role in filling this void and ensuring a smooth transition.

As Minister Sonii established new priorities for Liberia’s education system, the EDU assumed the supporting role in facilitating their implementation. One particular area of focus is the design and piloting of a Secondary Schools Improvement Program (SSIP). This is to deliver Minister Sonii’s goal of improving standards for secondary school leavers – by raising the pass rate of the senior high school examination (WASSCE) to 60% in public schools nationwide by 2028. SSIP aims to change core teaching practices at scale, by creating a new role in each school called the “Master Teacher,” which will provide intensive, personalized, on-the-job instructional leadership to fellow teachers.

Amid the COVID-19 pandemic, the EDU has played a fundamental role in supporting Minister Sonii as Liberia transitioned to distanced learning across the school system. The EDU supported the Ministry’s applications for World Bank and international development funding and served in an advisory role to translate the lessons learned during the Ebola crisis to the COVID-19 pandemic.

Governance and Communications Support: Over both administrations, in trying to get the education system back on track, the Ministry of Education has launched several ambitious and contentious reforms simultaneously. Big Win has supported the respective ministers to ensure that key stakeholders are engaged in the reform process, including parents, students, and a wide range of actors in the education system locally and internationally.

Big Win also has helped establish a governance structure and communications protocols to ensure alignment of resources to the ministry’s vision and to maximize the catalytic impact of key reforms on the education sector as a whole.

Both Minister Werner and Minister Sonii participated in the Harvard Ministerial Leadership Program, a collaborative initiative of Harvard University and Big Win Philanthropy.