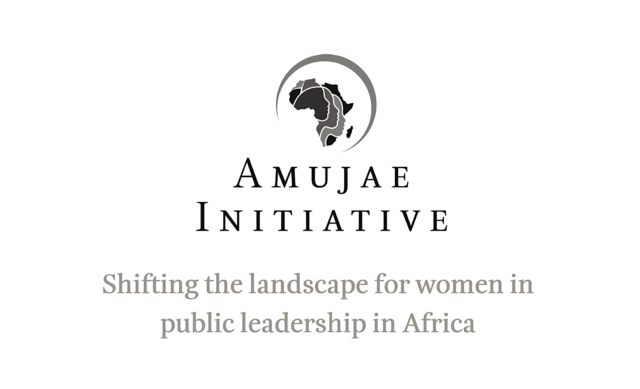 The Amujae Initiative is the flagship program of the Ellen Johnson Sirleaf Presidential Center for Women and Development. With Big Win Philanthropy’s support, the initiative aims to shift the landscape for women in public leadership in Africa, moving from a culture of tokenism to one that truly values women leaders. Amujae, pronounced ӓ mōō jāēē, means ‘we are going up’ in Kru, a Liberian language.

To date, the initiative has provided training, mentorship, and coaching to an accomplished group of 30 women leaders from 16 African countries who make up the two cohorts of Amujae Leaders. The initiative was launched with the announcement of the inaugural cohort on March 8, 2020. The second cohort was announced on January 15, 2021.

Despite the challenges of the COVID-19 pandemic, the first cohort still received tailored training and coaching through the EJS Center’s virtual programming. This included workshops, webinars, and training sessions with established and distinguished speakers and Amujae Coaches, including former President of Liberia Ellen Johnson Sirleaf herself, the recently appointed Director-General of the World Trade Organization Ngozi Okonjo-Iweala, and United Nations Deputy Secretary-General Amina J. Mohamed, among many others.

COVID-19 posed significant challenges in a multitude of ways and on every level, but the inaugural Amujae Leaders showed great fortitude and achieved notable milestones:

The 2020 Amujae Leaders also joined initiatives in their own countries to help overcome the challenges of the pandemic. More about the 2020 programming of the Amujae Initiative can be found in the EJS Center’s first report: Taking Stock of Women’s Public Leadership in Africa: 2020 Year in Review.

The second cohort of Amujae Leaders was announced earlier this year, and its members have already shown their fortitude. These 15 women are from 11 African countries and include current and former ministers, a county governor, a member of parliament, senior government advisors, and activists engaged with issues such as refugee rights, gender equality, and youth empowerment. Their full biographies can be found here.

So far in 2021, these women have been featured on CNN’s African Voices Changemakers, the BBC’s Africa Daily podcast, and AllAfrica; given public lectures at the Wits School of Governance; joined panels at events such as the Skoll Foundation’s 2021 World Forum and the Startup Ghana Summit. Anne Waiguru of Kenya was named as one of Kenya’s best-performing governors in a public opinion survey, Bogolo Kenewendo of Botswana was appointed to the G7 Gender Equality Advisory Council, and Fatoumatta Njai, a National Assembly Member in The Gambia, co-sponsored a bill to increase women’s representation in parliament.

At a two-day virtual induction event hosted by the EJS Center in January, Big Win Philanthropy founding Chair and President Jamie Cooper emphasized the importance of the Amujae Initiative in providing a continuing network to support the Leaders as they strive for the highest positions of public office:

“I have only through this program come to appreciate how tough the journey of getting yourself into those positions is, and you will need this team behind you—this sisterhood.”

Jamie assured the new cohort that they could also count on Big Win’s partnership:

“As you assume these positions and you take charge and you have your visions, Big Win wants to partner with you, and we will be there to make sure that transformational ambitions for your country are acted on. I can’t wait to meet you all in person and look forward to working with you.”

Learn more about the EJS Center and the Amujae Initiative here.